In 1937, a patent was first filed for a new aircraft that would be powered by two engines in the same fuselage, one located in the front pulling and one in the rear, pushing. The main advantage to this layout would be the increased power of a two-engine design without the attendant drag issues of two engine nacelles. Shortly thereafter, Professor Claudius Dornier began designing an aircraft that would incorporate these features, the Dornier Do P.59. This project eventually became the Dornier Do 335, the fastest propeller-driven production aircraft of WWII.
An aircraft testbed was commissioned in order to prove the feasibility of a pusher propeller driven by an extension shaft. Designed by Doctor Ulrich Hüter and built at the Schempp-Hirth glider factory at Wüsterburg, the test aircraft was designated as the Göppingen Gö 9.
The Göppingen Gö 9 was a small aircraft. Other than the propulsion method, it had a very normal layout. Basically, the Göppingen Gö 9 was identical to the Dornier Do 17, except the dimensions were reduced by 1:2.5. The fuselage was cylindrical, with the wings being mounted midfuselage. A cruciform tail unit was designed, with the bottom fin being supplied with a small wheel which acted as a tail bumper to keep the rear propeller from striking the ground on takeoff. The pilot sat in a cockpit located in the front of the aircraft, and the extreme nose was glassed in. One advanced feature for this small testbed was a fully retractable tricycle landing gear system. Power was supplied by a Hirth I M60 R air-cooled in-line engine which only developed 80 horsepower. The engine was mounted just behind the cockpit, midfuselage over the wings. A long extension shaft ran the length of the rear fuselage and drove the four-bladed pusher propeller.
Registered as D-EBYN, the Göppingen Gö 9 was extensively tested on the ground before it was taken into the air. The first test flights were made in early 1940, and was towed into the air by a Dornier Do 17 medium bomber. With Dornier test pilot Quenzler at the controls, the Göppingen Gö 9 handled well, and proved the feasibility of the rear engine concept. Many more test flights were made, and the tiny Göppingen Gö 9 even took off on its own power. The ultimate fate of this interesting test aircraft is unknown.

The Göppingen Gö 9 with its canopy cover removed

The Göppingen Gö 9, with its Dornier Do 17 towing aircraft in the background. Note the tail bumper touching the ground. The Gö 9 was so light, the pilot was needed to get the aircraft to sit on its tricycle landing gear. 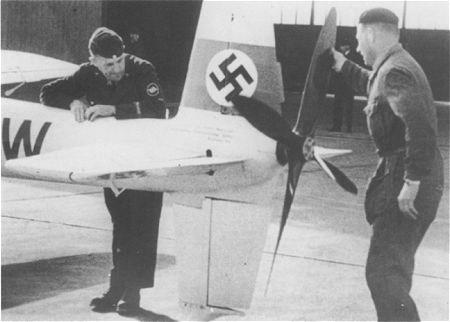 
A very rare color photo of the Göppingen Gö 9

Although not completely clear in this photo, the overall color of the Göppingen Gö 9 was RLM 05 Cream


The Dornier Do 335A-07, the final result of the Göppingen Gö 9 test program. 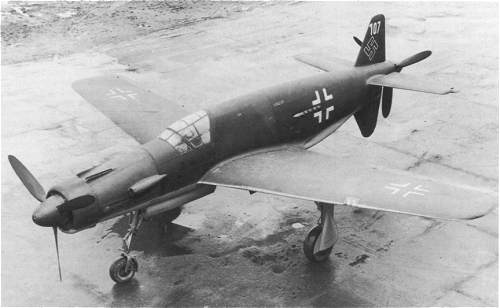