This Mistel project was one of the last glide bomb developments submitted to the RLM before the end of WWII. Arado, working with Rheinmetall-Borsig, designed a simple glide bomb that could be powered or unpowered, and carried beneath the Arado 234 or Heinkel 162. The purpose of this flying bomb, which could be guided by remote control or a target guidance system,  was to attack targets such as ships or  large fixed objectives.
Construction of the E.377 was wooden throughout the entire aircraft. The fuselage was circular in cross section and was cigar-shaped. Mounted in the nose was 2000 kg (4408 lbs) of Trialen 105, a high-explosive especially suitable for ship attacks. In addition 500 kg (1202 lbs) of an incinderary liquid was stored in the rear fusleage which also acted as ballast to counterbalance the forward warhead. A standard SC 1800 bomb could also be fitted in the forward fuselage of the E.377 in place of the other explosive.  The wings were tapered and shoulder mounted. They also served as auxiallary fuel tanks for the parent aircraft. Fuel was drawn from the E.377's tanks by means of jet pressure which drove a compressor in the powerplant of the parent aircraft.The tail unit was symmetrical on top and bottom with a horizontal tail mounted on the upper half of the fin.
Take off was accomplished by means of a releasable trolley which was similar to one that Rheinmetall-Borsig had designed for the Arado 234A. Since the Ar E.377 Mistel was heavier, an extra set of wheels were added to the new trolley. Once the aircraft reached takeoff speed, the trolley was released and slowed with a parachute and rockets. Assembly of this Mistel was carried out using a special trestle and frame to add each aircraft on top of the trolley.

Upon arrival at the target, the E.377 was released by means of explosive bolts and then was terred to it's target by means of a control device. This device made adjustments in the control and rudder movements from the carrier aircraft after launch, or the E.377 could just be set to glide straight after seperation.
There was also a twin BMW 003 jet powered version to be used with the Heinkel 162, since the single jet engine of the He 162 would not have been powerful enough to carry the E.377. This version was known as the E.377a and was similar in all other aspects to the E.377. A piloted version was also planned, to be a suicide weapon, but was cancelled before the end of the war. The E.377 was never constructed due to the end of the war.

The Rheinmetall-Borsig takeoff trolley used with the Arado Ar 234A.
This was to be strengthened for the Ar E.377 Mistel by adding an extra wheel on each side. 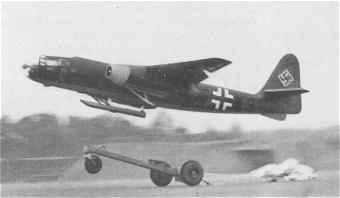 The Arado Ar 234A becoming airborne.
The Ar E.377 would have had a very
similar takeoff routine.

A side view of the
Ar 234C/Ar E.377 Mistel
combination. Please click here
to see an original three view
drawing.

A side view of the
He 162/Ar E.377a Mistel
combination. Please click here
to see an original three view
drawing.

Above color art from Reichdreams Dossier #3